Calder Valley’s stars of the future were in fine fettle this weekend with a host of stirring performances across the region. Martin Howard showed why he’s been accepted as part of the England U16 squad with a magnificent 15th place in the men’s’ seniors race in last week’s Stoodley Pike fell race. This genuinely classic race is one of the oldest in the fell calendar and has been graced by all the greats from Ron Hill to Kenny Stuart to Ian Holmes et al. Organised with typical panache by Todmorden Harriers, the race is a firm favourite and Martin can be delighted with his superb time of 22:32. 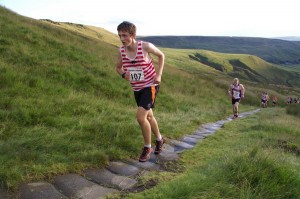 His stable-mate Jack Denton, who has also recently worn England colours, was also to the fore in this is race. Rubbing shoulders with the elite men up to the Pike, he was doing fine until he overcooked it coming down toward London Road and sustained an injury. But he’ll be back, and expect to hear a lot more of Martin and Jack in the future.

Elsewhere at Kettlewell, a plethora of red and white juniors bore down on the picturesque village for the Yorkshire Championships. In the Under 8’s race, Patrick Casey pushed Rossendale’s Billy Smith all the way, only to lose out by a mere three seconds, but can be delighted with his silver medal. In the same race, young Matilda Baldaro came a creditable 19th.

Talk in the paddock was that the U10s race could be one for the archive, with a star studded field strutting their stuff ahead of the start gun. Horwich’s young hare Cian Healey took gold with Matilda’s brother Jude chasing him hard with a scintillating run for 4th place. Jude was just ahead of team mates Billy Blacker in 7th and Eilo Beesley in 9th. Joseph Hobb, William Hall and Beth Blacker were other Calder placed finishers.

In the ladies Under 18s, rising star Issy Wharton took fourth place at Kettlewell, but was agonisingly one point short of the overall UK bronze medal. However, she can take comfort that this result rubber stamped her place as Yorkshire Champion. Reigning men’s senior British champ, Mercia’s Simon Bailey was on hand to dish out the trophies to a rapt young throng.