Here’s to our wonderful juniors, who were in action on the wooded slopes on the edge of Guisborough, North Yorkshire, for the 4th race in the Junior English champs series. Races were fast as they ran up through forest track and narrow footpaths which required tactical skills to overtake. 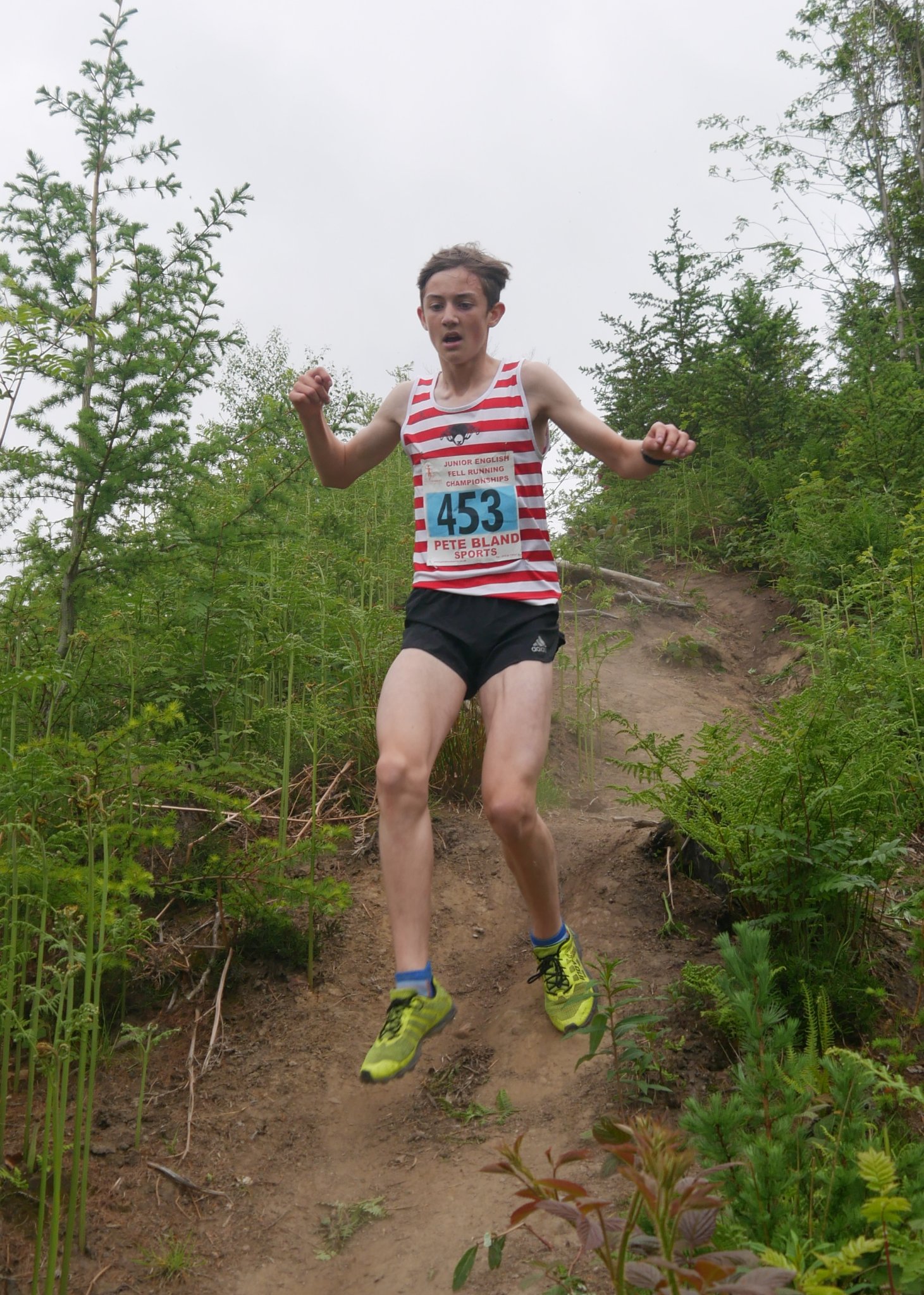 Charlie on the tricky descent

Charlie Pickins had an excellent run and powered round two laps of the course to come 1st U17 boy. He was followed by Euan Logue who had a good run to place 12th. Will Hall and Elijah Peers-Webb competed in a fast, competitive field, coming 4th and 8th respectively in the U19s. 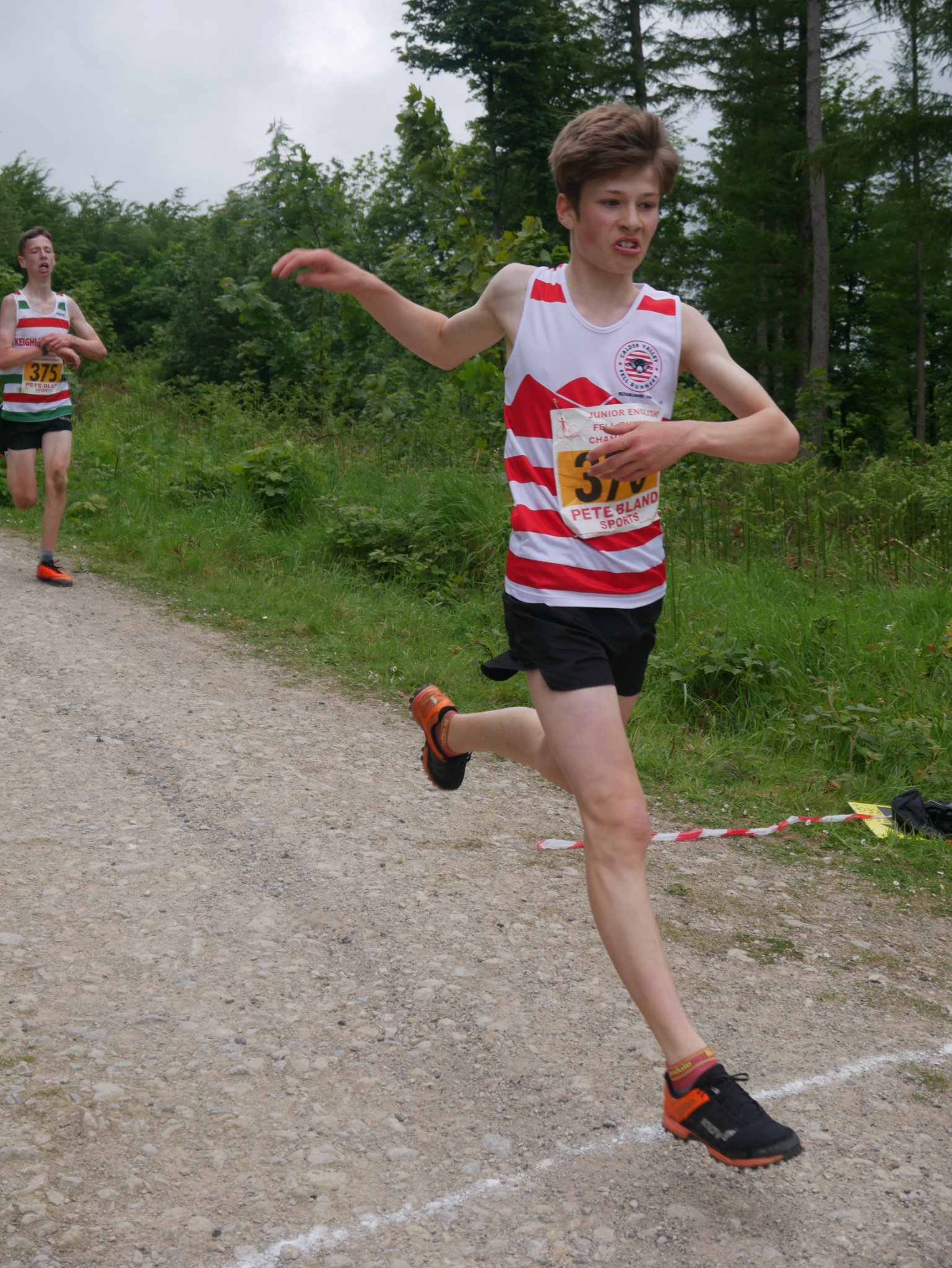 A strong finish from Thomas

Thomas McKee had a strong run in the U15 boys, coming 6th overall.

His sister, Clara McKee, also gave a great performance, coming 1st girl and outright winner in the U13 race. This secures Clara’s overall U13 girls 1st place in the FRA English champ series. In the U13 boys, Harry Cliff completed a fine race in 8th place, and Ted Parker a solid 21st place. 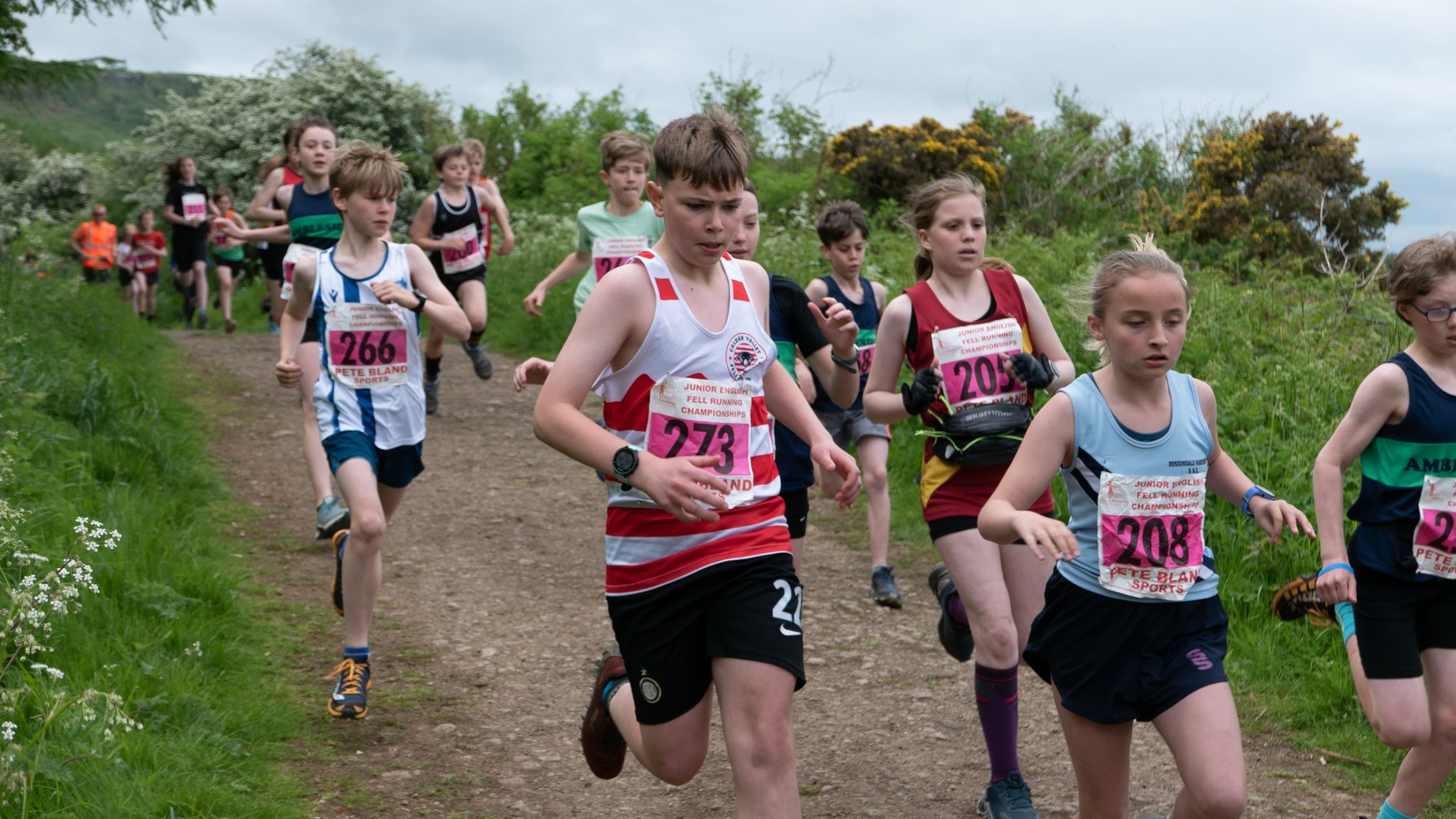 Ted, as always, working hard in the U13s race

Well done to all our Juniors who go from strength to strength.

Our Juniors doing us proud

This Sunday, 15th May also saw a couple of our U17s & U19 CVFR juniors have the honour of racing not only for club, but also for their counties of birth at the inter counties event at Great Whernside on the outskirts of Kettlewell. As well as an inter-counties event, this was also the third counter for the junior English championships competition, meaning there was a decent turnout and a high standard of racing. 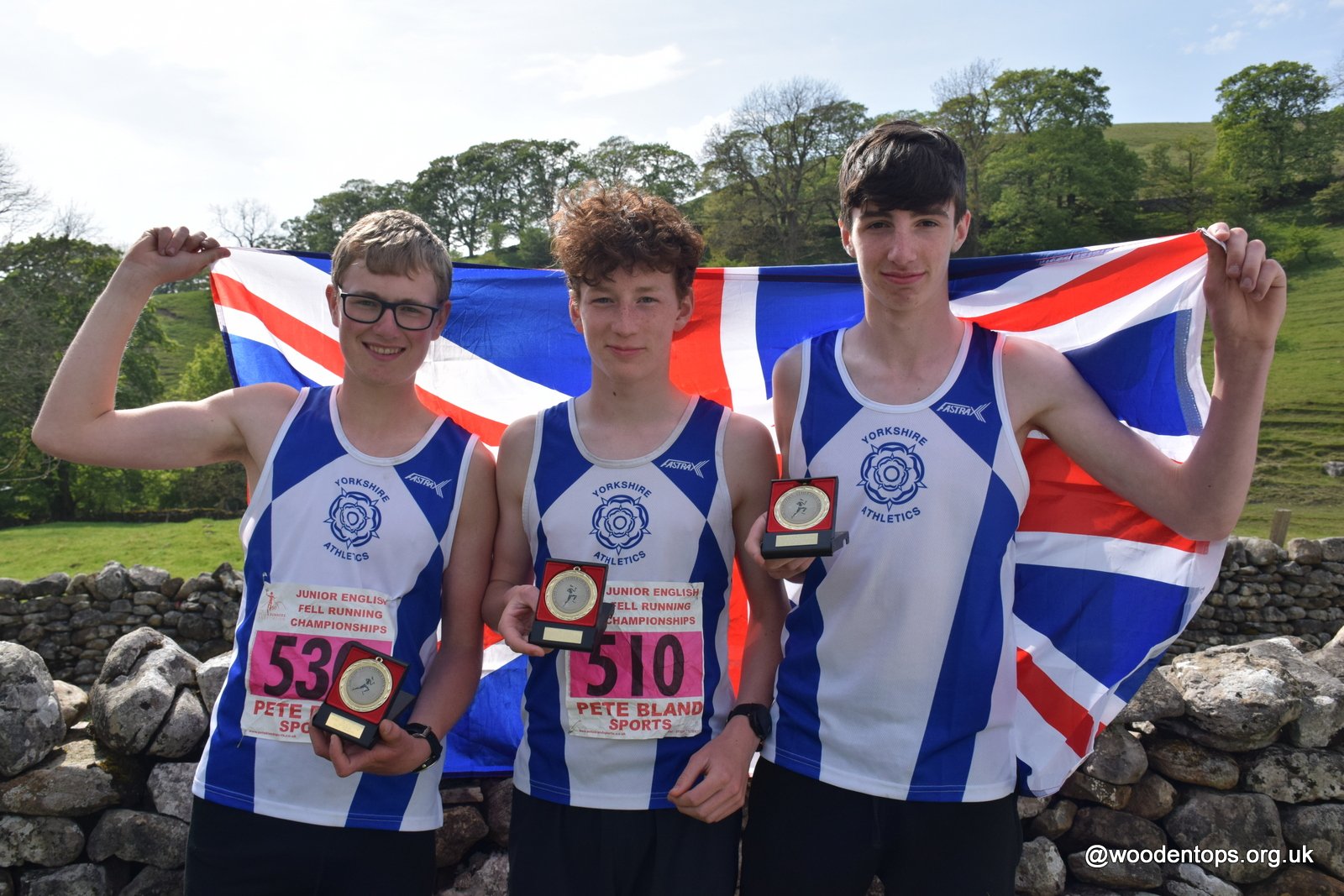 CVFR junior runner William Hall ran a cracking race in the British U19 Inter Counties Fell and Hill Championship race, securing a top three finish and so also win a third-place medal for Yorkshire. This helped Yorkshire to win the Team Gold. 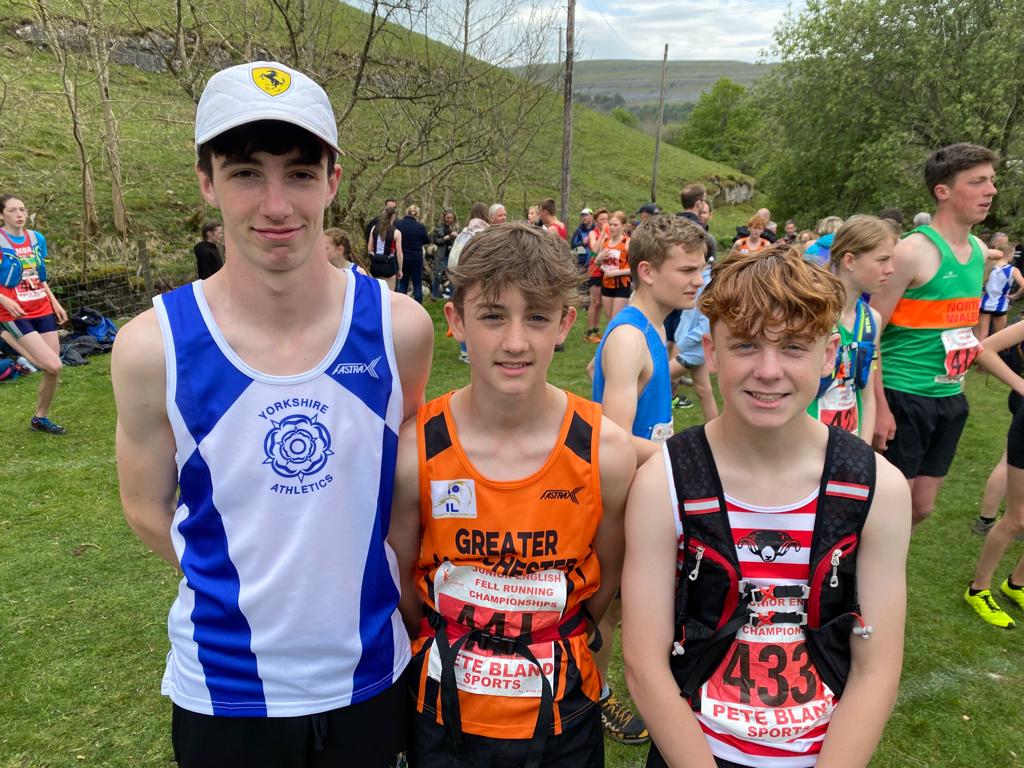 In the U17, Charlie Pickens, competing for Greater Manchester, ran very well to come 6th – only just over a minute and a half behind the first placed runner. Pickens recalls how ‘proud’ he was to wear his new orange & black vest for the first time and represent not only CVFR but also Greater Manchester. On the race, he describes a ‘fast start up a long steep hill’, and how following on from this, ‘despite less gradient, the strong headwind made it hard to pick up any speed’, meaning he had to just ‘keep on pushing through the pain’. After a short respite of flat, it was into the second, ‘steep & rocky ascent up to a ledge’. Here, ‘with many paths to choose from’, he was able to gain places by choosing ‘a steeper but more direct route’ up to the top, where ‘there was a 200m sprint to the turnaround’, after which it was a case of ‘haring it back down the way you came’, i.e., down a ‘challenging & rocky descent’, ‘with loose footholds and scree preventing any proper speed’. The race finished with a sprint, with a following wind and ‘the freedom to choose paths’, which allowed him to choose a ‘very direct route to the finishing funnel’. Pickens was quick to praise the organisers & comment how much he appreciated seeing so many competitors, especially running for their respective counties. In the U17 boy’s race, there were also top 20 finishes for Calder Valley’s Leo Illstone & Euan Logue (16th and 20th respectively). 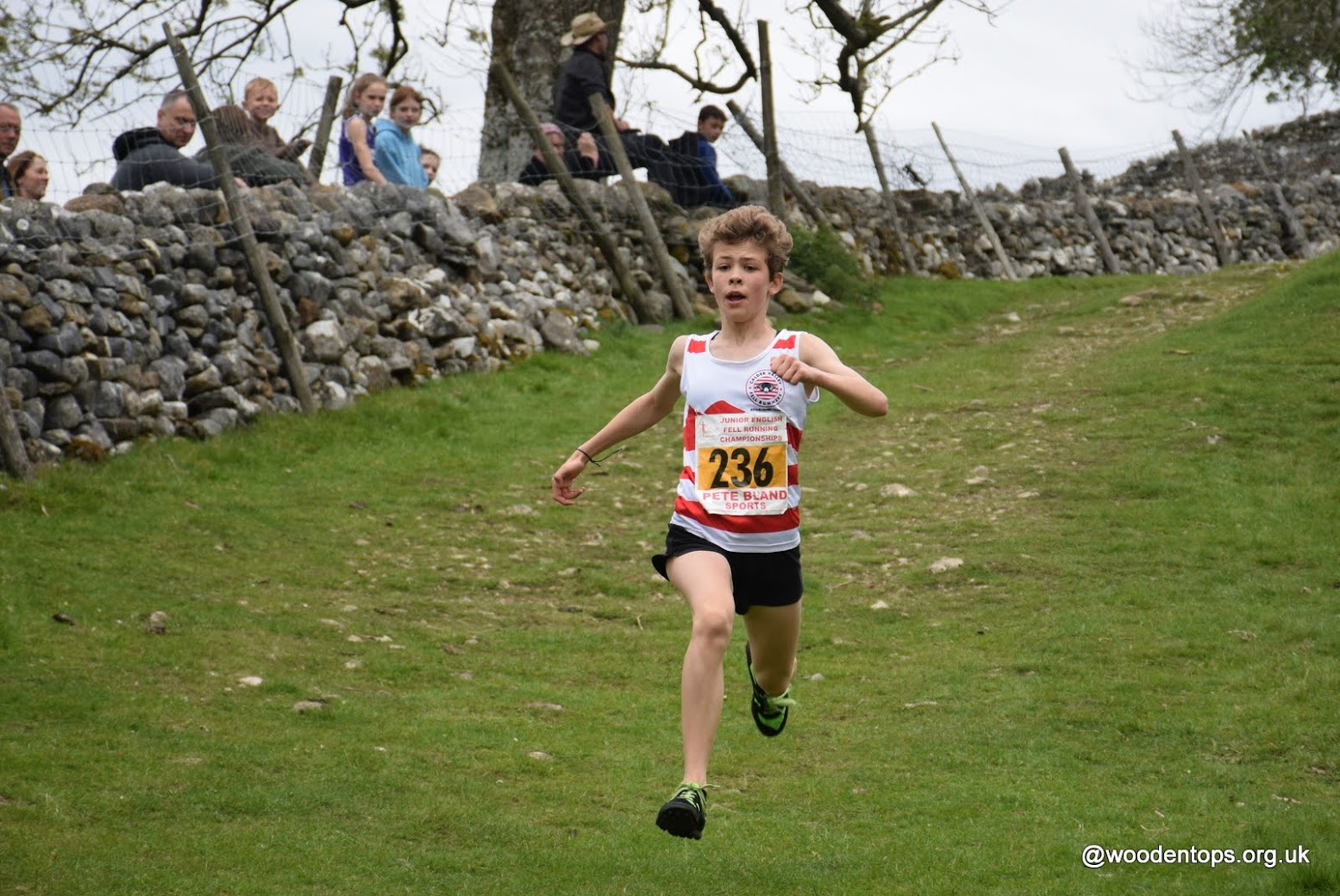 Clara flying to the finish

In the U13 race Clara McKee won another outstanding race to win outright (beating all the boys) by over half a minute and finishing more than one and a half minutes ahead of the second-placed female runner. Also in the U13, Archie Cole & Harry Cliff finished 12th & 14th boy respectively. 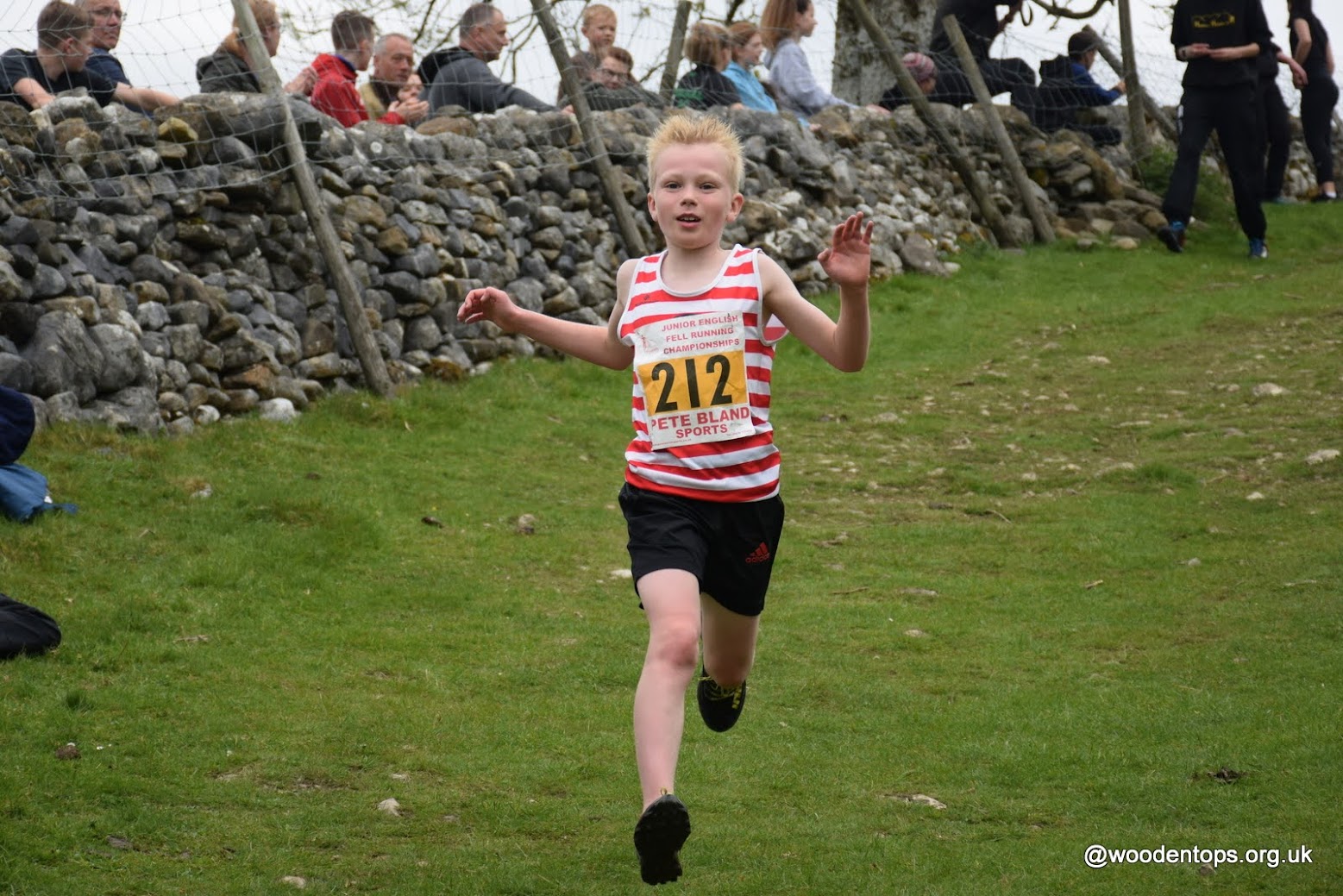 In the U15, Thomas McKee ran well to get a top ten finish (8th), with Wynn Standish finishing 42nd boy. Finally, in the U11 race, Georgie Illstone was the only CVFR runner & did well to take 16th place in the girl’s race.