Will leading from the off at Helm Hill

Some of Calder Valley’s keen juniors, known as the ‘racing snakes,’ have been taking part in the Kendal Winter League Series, which takes place across the Lakes and Dales.

On Sunday 5 March in the Howgills, three of the snakes took on the Cautley fell race near the famous Cautley Spout waterfall. In the under 13s race, it was a fast start followed by a steep, unrelenting climb to the 300 metre mark before about turning and running as fast as their legs could take them on the very steep descent back to the finish. 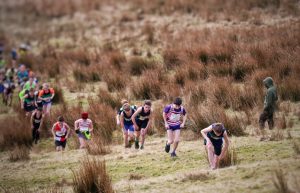 William Hall was first back for Calder Valley and only 13 seconds from taking the win from Ambleside’s James Bowden. William was closely followed by his team mate James Duffy who took 3rd and Patrick Casey placed in a great 13th.

After such a strong race, William Hall took to the fells again the following Sunday (12th March) in the Helm Hill race and went one better to take victory. The fast race takes place on ‘The Helm’, a great little hill near Oxenholme, Kendal, very popular with fell runners. After a great start William widened the gap on his opposition when it got to the steep climb and was out on his own for the descent, hence building a 24 second gap between him and the 2nd placed junior.

In the Longsledale race on Sunday 19th March William Hall again took another impressive win putting his fearless descending skills to good use in the wet and very slippy conditions in the rain. Patrick Casey put in another great run to place 12th. They are looking good for the start of the FRA championships. 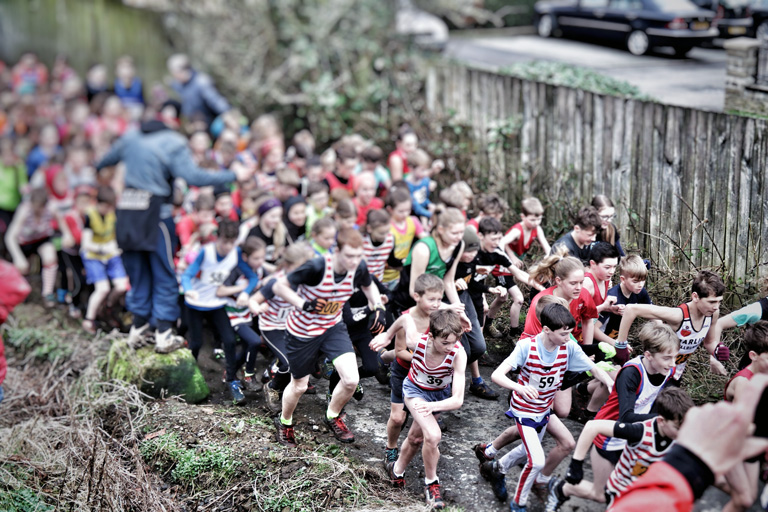 Its all about having fun

Keen points scorers turned up in the wintry weather on Ilkley Moor in the first of Calder’s Junior championships on Sunday 26th February. Testing conditions for the youngsters with lots and lots of mud to run in but they took it in their stride, slip slidding and fast descending their way round their races. Great to see Lucas Greenwood competing in the under 17s race with a good result placing 8th in a time of 17.24. The winner was Oscar Stapleton from the host club Ilkley Harriers in a time of 13.44. Lucas is making good progress with all his continuing hard work at training.

A good showing in the under 15s from Eilo Beesley placing a fantastic 7th place in this tough age group in a time of 15.02. Alex Thompson from Wharfedale was the first boy home in 12.47. Beth Blacker and Maya Brunt ran really really well to take 6th and 8th place respectively for the girls. Beth posted a time of 17.38 and Maya not far behind in 18.32 with the winning time of 14.57 from local Poppy Anderson. 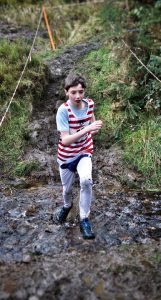 fun in the mud for Will as he takes the win

The most competitive contest is the under 13s where we have some rising stars. With William Hall taking top spot in 6.25, chasing hard for second James Duffy only 16 seconds later and hot on his heels Joseph Hobbs to take a fantastic third in 7.05 meant a clean sweep for the red and white hoops. Alex Duffield was only a further 2 second behind to take 5th spot. What a team!!!! Not to be outdone Matilda Baldaro was first girl home in 9.29 followed closely by Tom Owen in 9.32. Sylvie Smith did well in the testing conditions in a time of 9.41.

The I mile route of the under 11s saw a win from Barlick Fell Runners Jacob Reeday in 7.07 with Bingley Harrier Martha Jackson taking 2nd place just 1 second behind the winner. Charlie Pickens was the first back for the hoops in 7.55 with team mate George McFie only 6 seconds adrift. Leo Illstone did well in 9.14, Finley Canning 9.32, with twin sister Evelyn Illstone chasing her brother in a time of 9.44. Oliver Pickens and Fearne Hanson had a great contest posting exactly the same time of 9.46.

Under 9s saw another great result with Sam Annison taking second place behind Wharfedales Hugo Bishop. Only 3 seconds separated them with Hugo 4.12 and Sam 4.15. The future is certainly bright indeed.