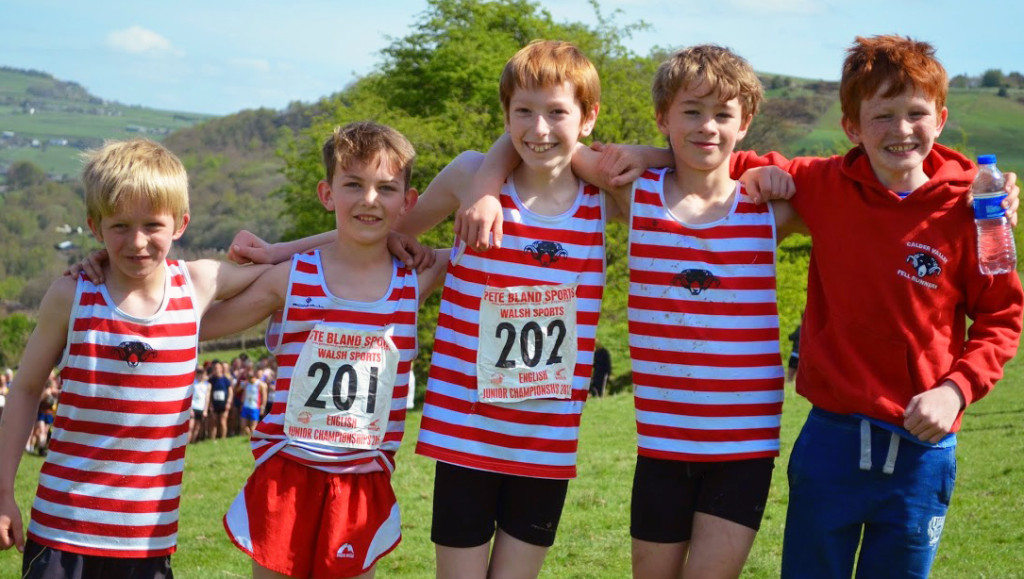 some of our talented juniors … www.woodnetops.org.uk

Despite Calder Valley having hosted a round of the junior English championships on 4 previous occasions and being reasonably assured of putting on a good show at the Coiners fell race held on May day the organisers were still left hoping for good weather. They were not disappointed and nor were the 320+ juniors who turned up to race. Despite the good weather on the day racing conditions were always going to be affected by the days of rain leading up to the bank holiday and all the runners found the underfoot conditions very wet and a little muddy in some more remote parts of Erringden Moor. 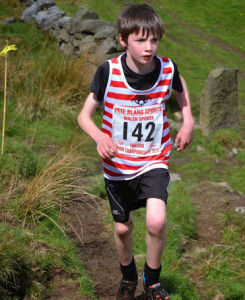 William racing back at Coiners. www.woodentops.org.uk

Like the weather Calders juniors didn’t disappoint. Although the best result of the day went to U18 Jack Denton with his fine 3rd place as he continues his return to the form that has seen him selected for international honours it was once again the host of bright young runners coming through that stole the show. This was really evident in the U10 race where Calder were able to turn out 10 runners, 8 boys and 2 girls. As in previous rounds of the national championship the boys really packed the top of the leader board. Having won the clubs bragging rights by finishing ahead of his team mates at the last English champs race three weeks previously William Hall this time had to settle for 4th with James Duffy winning from Billy Blacker and Joseph Hobbs, all four Calder runners were in the top 10. Further back were Patrick Casey, Tom Owens, Elijah Webb, George Whitaker and Connor Glyde. Matilda Baldaro and Sylvie Smith placed well in the girls race, over the 2km course. 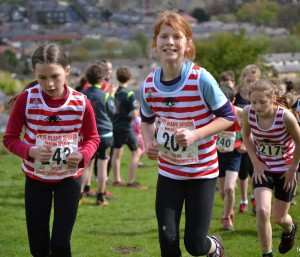 Olivia, Maya and Robin on their way. www.woodentops.org.uk

The racing didn’t stop there for the host club though with 9 runners taking to the start line in the U12 age group over the 3km route that sees the runners heading up Daisy Bank all the way onto the edge of Erringden Moor before turning and descending back to the finish. Eilo Beesley and Jude Baldaro in their first year in the U12 age group have so far gone toe to toe with the best in the country as well as with each other and on this occasion Eilo crossed the line one place and just 2 secs ahead of Jude in 15th and 16th respectively. Finishing a little further back were Erik Powell, Edward Hall and Luke Greenwood. In the girls race Olivia Sygle got back to winning ways finishing ahead of team mates Robin Casey, Maya Brunt and Ruby Mcfie.

Others Calder runners taking part in the day were, Wynn Standish in the U8, Adam Thorpe, Danny Wills, Toby Brunt and Cherry Sylge in the U14 Martin Howard in the U16 and Matthew Murray in the U18. 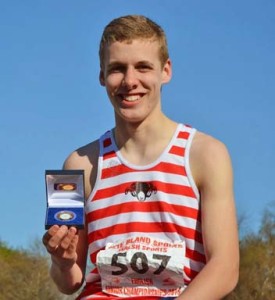 Jack who was surprised at winning this medal – we weren’t. www.woodentops.org.uk

For the juniors, closer to home at Howarth’s midweek Bunny Runs saw Max Wharton, Jack Denton and Edan Whitelaw running more like hares than rabbit to win the 3rd Bunny Run team prize last week and were rewarded with a boat load of Easter chocolate each. Jack Denton put recent injury woes behind him to win Yorkshire Bronze at the West Nab junior English race on Saturday.