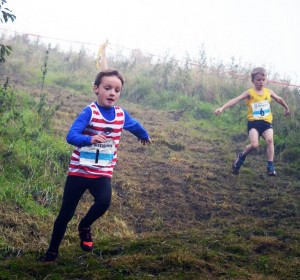 Withins Fell race famous for its chocolate handouts had junior races for all age groups and with it being in the clubs junior champs the races were hotly contested for both points and confectionary.

Future Calder star man Patrick Casey was first under 8 overall as he descending fast to claim his curley wurley chocolate bar. Matilda Baldaro was very close to being first girl as she grows more confident and determined with every race. Tom Owen, a new comer to the clubs Juniors, ran really confidently. 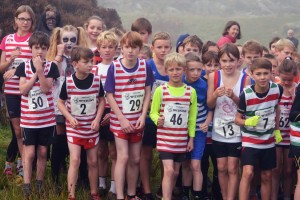 In the U10’s hotly contested race Jude Baldaro is becoming a club star placing a fine 3rd with James Duffy, another talent, hot on his heels and amazing considering James is still only 8. A real talent to watch in the future. Joseph Hobbs ran a really strong race. Eilo Beesley was further back in the field than usual due to having a second look at his Wheetabix half way around the race. Being the tough little competitor he chose to continue running managing a respectable 12th despite looking rather gray and under the weather. William Hall has done really well in races this year but had to retire after getting trampled on in the mad dash up the first hill. Olivia Sygle and Beth Blacker continue there battle with each other and were only split by 4 seconds in their race fort club points. Maya Brunt ran will her usual enthusiasm and gets better and more determined with each race.

Cherry Sygle was the only under 12 to run but equipped herself well to claim some valueable club points. Martin Howard was the sandwich filling of red and white stripes between Bingley’s blue and white Merricks as he claimed second place in the under 16/18s race less than 1 minute behind Matthew and over 30 seconds in front of Matthew’s sister Victoria. Our own Matthew Murray continues to improve as he claimed 5th spot.