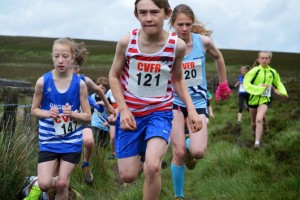 After a glorious Friday evening spent flagging the course the weather turned wet, cold and windy on the Saturday! But despite the change in the weather we had 87 entrants for the Reservoir Bogs junior race which goes over the moors and are good and challenging but enjoyable routes for all ages. We had some excellent results given the weather.

In the Under 10 race the winning boy was Jackson McKay from Clayton in a time 7 mins 24 seconds following on only 5 seconds behind was local boy Theo Davies (Calder) with Joseph Hopley from Rossendale taking 3rd spot. In the girls race our two local Calder girls battled it out for first and second with first place this time going to Beth Blacker  in a time of 8 mins 41 seconds and second place to Olivia Sylge just 5 seconds behind and Rossendale’s Sophie Morgan was third.

In the Under 12’s the first junior home in a stunning run beating all the boys was Clayton’s Briony Holt who also broke the girls record by over 40 seconds in a new time of 14 mins 31 seconds followed by Joseph Carnelley (Bingley) for the boys. The second and third girls home were Maisy Vasic (Rossendale) and Eleanor Root (Clayton). For the boys it was our two local Calder runners Ruari Chesworth & Conner McCabe.

In the Under 14’s Thomas Nelson of Wharfedale won the boys race with a new record time of 12.16 and Victoria Merrick of Bingley was equally impressive winning the girls race with a record time of 14 mins 27 seconds shaving 13 seconds off the previous course record. Second & third in the under 14 boys category was Ben Green (Rossendale) and Matthew Merrick (Bingley) were also inside the old course record and for the girls Alice Pier (Clayton) and Emily Morgan (Rossendale).

With the conditions still good underfoot in the Under 16’s we had yet another record, set by Lucy Haines from Ilkley who won the girls race in 28 mins  58 seconds. Lucy was followed by Abigail White (Bingley) in second place and Beth Quinn (Clayton) in third place. For the boys, the winner was Thomas Marchant from Pendle in a time of 25 mins 58 seconds followed by George Pier and Kenan Eti both from Clayton Le Moors.

Many thanks to all the helpers that made the event possible.

Our juniors have been busy again. The local fell running club has a thriving junior section and some of its emerging stars have been taking advantage of the weather and racing over recent weekends in both the Dales and the Lakes. Its one thing that can certainly be said for fell running you really do get to do it in some beautiful places.

Last weekend saw runners heading up to take part in the Hawkswick fell races and the weekend just gone saw them heading up to Langdale. Both races are part of the Fell Runners Associations English Championship and as such attract the very best juniors from all over the country.

The races are divided up into age categories starting with U8 and going up in increments of two years. Billy Blacker took part on both races in the youngest category and finished 4th in both races and was beaten by his club mate at Hawkswick William Hall who was actually making his fell running debut and yet narrowly missed winning the race out right finishing a great 2nd place. In the U10 race there is a rivalry developing within the club between Olivia Sylge and Beth Blacker who seem to take it in turns to beat the other however at Hawkswick nothing could separate them and they were given the same time as they crossed the line neck and neck. However Olivia just edged her rival in the Langdale race. This time by just 4 secs to finish 6th girl and Beth was 7th. The two girls appear to relish the rivalry and they train happily together with Calder juniors on Tues evenings, such positive competition will only help them as they develop as runners. Theo Davies and Jed Denneny found the Hawksick race which starts in the valley bottom and heads very steeply up the sides of the valley before turning round and taking the runners back down the grassy slopes tough going as they were running in just there second race however both acquitted themselves well. Cherry Sylge was Calders only representative in the U12 race at Hawkswick and with no one in the either of the U14 age races the racing was completed by Matthew Murray and Jack Denton in the U16. Matthew is turning into a prolific racer, having trained with the club for years it is only this season that he has taken the plunge into races and has already completed more races than any other junior this year. Jack Denton is in the lower half of his age group which means he will get another year racing at U16, so really this year should have been about getting used to the longer distances. It seems that no one has told Jack of this as he continues to produce some very impressive finishes. He claimed a great 5th place at Hawkswick however chose to save his best until last by finishing in 2nd place in Langdale which given the extremely hot temperatures turned out to be perhaps the toughest of all the races. This result meant that that Jack finished 5th overall in the English Championship. He should be one to watch for national honours next year. The other Calder juniors to make it to the Langdale race were Elio Beesley who lead the red and white contingent home in an inspiring 15th place who is just improving with every race he takes on followed by Fenner Hughes-Jefferies and Jude Baldaro all running in the U10 race.

In the older age category it was good to see Issy Wharton back on the fells and running better than ever taking a great 7th in bvery testing conditions in the U16 race to mean that she has finished 6th in the English Championships.

It was great to see the younger juniors taking on the mantle of racing in the red and white colours of Calder Valley in the absence of their more established older team mates. Max Wharton was unable to complete the championship series as he was away in Bulgaria on International Duty representing Great Britain in the junior mens European Mountain Running Championships where despite being the youngest competitor he was first British athlete across the finishing line of the gruelling long uphill only race finishing brilliantly in 14th place.

Another one missing was Edan Whitelaw who was representing West Yorks in the prestigious English Schools Track and Field Championships at Birminghams Alexandria Stadium.

Both will be back on the fells along with their club mates at next weeks local fell race from the Pack Horse Pub at Widdop on Weds 17th at 7.15pm