Calder Valleys Midsummer madness weekend of fell running kicked of on Fri evening amidst rain of biblical proportions and flood warning sirens sounding. The weekend consist of 3 senior races over the weekend and a series of full age groups races for juniors on the Sat as well. With two of the senior races being short races juniors who have reached the tender age of 14 are entitled to take part in them and if they complete the junior race are able to compete for the overall title of junior champion.

Three of the clubs juniors lined up in the torrential rain on Fri evening to race Whickin Hill which is a short 3 mile route straight up to the Sheepstones trig point and back down a very tough climb of 1000’. With conditions under foot bordering on ridiculous records were never going to be broken but that didn’t stop the juniors performing brilliantly and from the start they were all to the fore as the race climbed relentlessly to the trig. At the turn Max Wharton was in 2nd but some way behind the leader however as the descent passed through the tricky gorse lined section he saw his chance and passed the leader and was able to open up enough of a lead to hold of to the finish and secure his first win in a senior fell race. Edan Whitelaw and Jack Denton were both just outside the top ten with Edan finishing 12th and Jack 16th.

Onto Sat and with the rain having finally stopped and the roads passable again 43 juniors braved the conditions to take part in the Reservoir Bogs race, has there ever been a more aptly named race.

While the equivalent senior race takes runners all over the open moorland via a series of checkpoints that need to be found the junior routes a much shorter yet equally challenging as much of the terrain is over energy sapping tussocks requiring good technique and loads of stamina. Sisters Oliver and Cherry Sylge both won their respective races in the U8 and U10 age categories setting the tone for some great Calder performances. Sophie King took second place in the u10 race and with it a silver medal.

In the U12 boys race Ralph Boggis was unlucky to miss out on a medal in 4th place and his fellow racers Callum Mawby and Nathan Sharkey couldn’t be separated crossing the line together in 11th. In the equivalent girls race Gemma Johnson showed her experience by taking a good win whilst Issy Woodward finished 7th in only her second fell race.

With no apparent after affects from the previous evenings race both Jack Denton and Edan Whitelaw ran well to take convincing race wins in the U14 and U16 races which left both runners separated by just 4 points in the series and just Sundays race to come. Calder other racer on the day was Adam Johnson who finished in a creditable 8th place in the U14 race.

So to the Tom Tittiman race which concludes the 3 race series and is a 4 mile open moorland route to High Brown Knoll via the eponymous hill top. Edan made his intention clear from the start that he wasn’t going to let Jack overall his lead and snatch the series title from him by setting of with the very quick seniors settling into 6th place along the track with a group of 4 of 5 others close behind. As the race progressed positions were exchanged although Edan was holding his own when the race reached the turning point. Meanwhile Jack was also running well about 8 places back and ready to pounce. Whilst all the route is fast and runnable it is essentially an uphill run to half way stage and then all down hill from there and over the second half of the race few places changed. This meant that Edan finished in 10th place which was his first top 10 placing in a senior race and Jack went one better than his Fri placing by finishing 15th. The series win therefore went to Edan Whitelaw who is the more experienced having been with Calder valley for 6 years now but with Jack Denton improving all the time who knows for next year.

Meanwhile over in Ireland Bradley Traviss was taking part on the Sat in the World Youth Challenge race at Glendolough. He had been selected to represent England along with his Yorkshire team mate James Hall. Both lads finished inside the top 10 with James 4th and Brad 9th. Unfortunately for the lads they were not able to be in contention for the team prize as the selectors chose not to travel with a full team meaning that any chance to take home a well earned medal was taken from them. With their two great runs they would certainly have been in contention. Despite this setback it was still a great honour for Brad to represent his country and recognition of the fine form he is in at the moment. 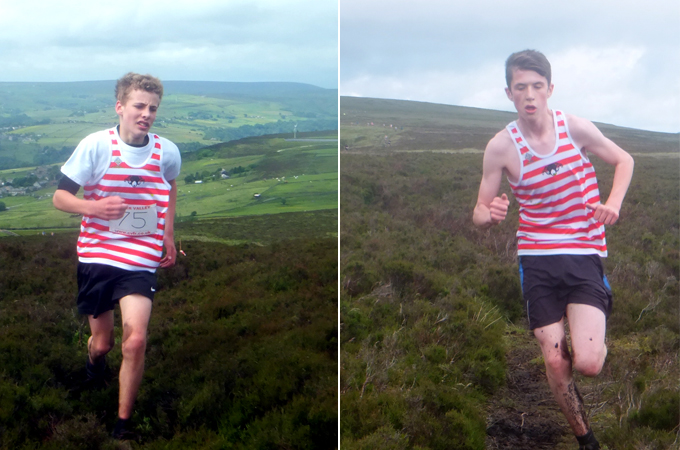 Jack and Edan as they race hard

The last two weekends have seen some important races for juniors with some great runs for the individuals concerned and the club. Firstly on the weekend of the 19th May the Intercounties race was held over the Shining Tor fell race in Derbyshire. Although a long standing event for seniors this year saw the inaugural running of the junior categories of U16 and u18. Each county entered teams of 3 runners in each age category and representing his county in the U16 race was Max Wharton who ran through severe stomach cramps to finish 6th overall but only 3rd Yorkshire counter such was the high standard.

In the older age group Brad Traviss who is currently experiencing a real surge in form ran exceptionally well to lead home the Yorkshire team finishing in 2nd place overall.

The following weekend saw the English Junior Championship move to Cowpe in nearby Rossendale for the 3rd round. The weather couldn’t have been hotter and with the course taking all the age groups out over rough exposed moorland this was real test of character as well as ability.

Picking up where he had left of the previous weekend Brad Traviss lead the race for large parts of the course and finished with a win in the U18 age group. This now makes it 3 wins out of 3 for Brad who looks certain to be crowned national champion. With the victory came the added bonus of the being selected automatically to the England team that will compete in the International race held later in the year. A great honour indeed and one that builds upon his selection to run for England last year in the home nations race.

With no male runners in the u16 age group due to injuries Issy Wharton and Molly Jagger both ran in the girls race and found the conditions really challenging and struggled to cope with the heat.

Martin Howard put in a solid performance in the U14 race initially he was well up with the leaders on the way out but as the race reached its later stages he began to tail of but still managed a very creditable 20th. Moving down to the U12 age groups both Isaac Mitchell and Nathan Sharkey ran well. Isaac in just his second fell race improved on his previous performance in a national race to finish 16th and Nathan also improved his placing. With half the English series now completed Nathan is inside the top 30 with Isaac just a few places further back.

The next day saw two CVFR juniors in action again as if the tough Sat race hadn’t been enough they also travelled across to the low key yet fantastic Saddleworth race which is held at Greenfield, which was also in the club championship. The junior races start from a scenic bank on the hill and take juniors either towards or to the monument at the top of the hill. Martin Howard managed to hang on to the leaders on the long climb to the top and then was able to let loose on the long downhill finish to move up to take 3rd place. Nathan Sharkey improving with every race managed to also get into the top 10 in his age group finishing 7th in the U12. The two lads were also joined by Issy Woodward who was taking part in her first ever fell race in the red and white vest of Calder finished behind Nathan over all in the U12 but was 5th girl which was a great start for her.

The next race in the junior club championship is our own race – Reservoir Bogs which is on the Sat of the midsummer weekend. We are looking to get as many of the club juniors to take part as possible and really kick start the racing season.