Some of our juniors have been busy racing through their summer holidays at local galas but it looks like the competition was every bit as tough & full of fun at the post race games as it was at the actual race. 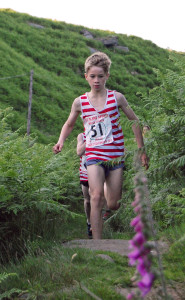 In what were near perfect conditions on a glorious summer evening Calder Valley Fell runners juniors set about dominating Widdop – a local fell race which starts and finishes at the Pack Horse pub. Of the 66 juniors who took part 29 were running in the red and white of Calder Valley. There would have been but for various school commitments.

The tone was set in the U8 race which always sees the smallest runners complete their race before all the other juniors set off together to ensure they are all safe with James Willis finishing 3rd in his first race, Wynn Standish 5th and Fearne Hanson also 3rd in the girls race.

All the other age groups set off at the same time but in different directions to enable the older ones to run slightly longer routes. Within half a mile of the race the routes all converge and this leaves the older runners trying to chase down their younger compatriots who are desperately trying to stay ahead. The route sees the U10/12 head down into the river bottom before climbing up to Widdop Reservoir where they are turned by a marshall and return to the finish field, the same marshall also sends on the U14/16/18 runners who climb further to pick up the Pennine Way which takes them out over the moor to descend and return along the same route as the senior race. It makes for a fine sight from the start and finish field to see the lead runners turning and working their way back the line of still climbing juniors. Its also reassuring to know that the fantastic marshalls strategically placed around the routes are doing the jobs and making the whole race experience safe. 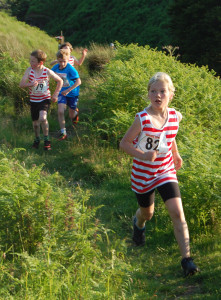 As the runners re entered the field it was clear that there was a battle royal going on for supremacy as James Duffy, Joseph Hobbs, William Hall and Billy Blacker all in red and white  sprinted for uphill to the line exchanging places as they went. Fell running doesn’t posses the photo technology that was required to split them on the line with James and Billy both being given the same time with James taking the win and then just 1 second behind both William and Joe with William taking 3rd  spot. That wasn’t it for CVFR though as the next 3 boys to finish Alex Duffield, Patrick Casey, and Joseph Willis showed. Behind them in 9th was Elijah Peers-Webb, 10th Connor Glyde, 11th Tom Owen and 12th George Whittaker. Not to be outshone by the boys though Sylvie Smith finished 2nd girl in the U10 race beating many of the boys in doing so and Matilda Baldaro took 3rd.  Lydia Morgan in her first race just missed a medal in 4th.

Jude Baldaro lead home the CVFR contingent in the U12 race and in the absence of the current championship leader took a very valuable 10 points from the night to ensure that the U12 club championship will be decided at Thieveley Pike the final race in the series. Following Jude in was Jack Willis in his debut race just not quite emulating his brother as he finished 4th, Luke Greenwood improving to 6th, and in the girls race Beth Blacker did manage to equal her brothers performance by also taking 2nd just 4 secs ahead of another debutant Daisy Holmes who ran brilliantly to take 3rd place. Both girls are surely ones to watch out in the future.

In the older age groups the U14 upwards the races take the juniors way out onto the moor and although they are never far from the Pack Horse pub there is a real feel of being out in the wilds. Taking on this challenge in Calder colours were Cherry Sylge who continues to improve this year seemingly relishing the longer distances, finishing in 2nd place. Oliver Simpson 5th and Lucas Greenwood 7th continued the trend of taking part in their first fell race whilst sandwiched in between them in 6th was Toby Brunt who dramatically improved his time from last years race.

Four race records were broken on the night but Calder Valley had to wait for U18 Jack Denton to race before one of those new records belonged a red and white runner and as  Calders other U18 runner Matthew Murray finishing 2nd the successful evenings racing was over.

Weekly junior training sessions take a well earned break over the summer holidays but we will be back on Sept 1st.