Look Jude and Elio – no shoes on. Ruby and Matilda doing well. www.woodentops.org.uk

It was mud glorious mud that awaited the 374 junior racers at the ever popular spellbinding Pendle Hill over in Red Rose country. This year it was the second of the FRA Junior English Championships with 16 Calder Valley Fell Runner travelling to Lancashire to compete. 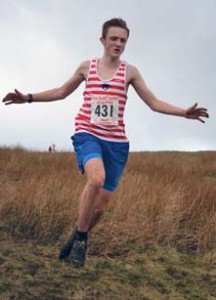 In the under 18s race it was Jack Denton who showed improvement from the first race at Errwood Hall by coming 6th out of 24 runners competing in his age category. Next up was gritty competitor Martin Howard and he had a good result placing 11th out of 52 in the under 16s. The club had no juniors competing in the under 14s but the under 12s are going strong with Maddy Smith 16th girl, Elio Beesley 21st and Jude Baldero 30th out of 89. The mud was very testing for Elio and Jude as they both lost a shoe and had to carry on running without them … Jude never found his! Another great run from the talented trio James Duffy (5th), Billy Blacker (6th) and Alex Duffield (10th) in the under 10s out of a good field of 74 runners and Matilda Baldero who always works hard was 18th under 10 girl. Full junior results here. 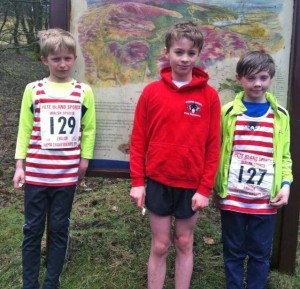 The competitive under 10s

Calder Valley Fell Runners’ seniors had a well earned weekend off and it was left to the juniors to showcase their skills at the first English Championship event. The route at a wet and windy Errwood Park in the Peak District had a steep start and a fast descent to finish which is the type of terrain that the local juniors are used to. Spectators got to see most of the course which made for exciting viewing. There was a fantastic turn out for Calder Valley and James Duffy, Joseph Hobbs, Alex Duffield showed the way in the under 10 race. They finished 4th, 5th and 6th and if there had been a team prize it would have been theirs for the taking.

There were also good runs from William Hall, 12th and with Patrick Casey just moving up to this age category a 23rd place was good in a field of 31.

Calder’s Silvie Smith did well in her first fell race for the club in 25th and Matilda Baldaro, showing improvement, was next girl home in the same age category just one place behind her team mate in 26th position. 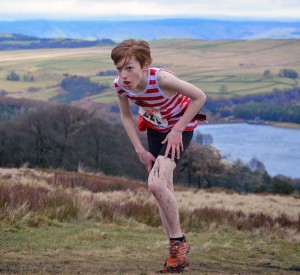 A field of 43 took part in the under 12s race and Jude Baldaro came 13th and and Edward Hall 36th against tough opposition.

Martin Howard ran very well but he was just outside the top ten getting eleventh out of 42 in the under 16 race while his friend and training partner Jack Denton was disappointed with his run. After being out with an ankle injury 9th out of 23 isn’t a bad start in the under 18s. Denton reported that there was some confusion among the older age group events with the marshals unsure where to send the different age groups. This resulted in the under 16s doing a longer race than the under 18s!