Now the 3rd and final individual Bunny run is over Calder Valley juniors can reflect back over the 3 race series with some satisfaction knowing they only have the relay event to go now. The lads have been consistently at the front of all the races, in the first BR1 with the help of super fast senior Tim Ellis Edan and Jack were able to claim the winning the team prize. Jack had never seen one of Dave Woodheads famous prize giving and simply couldn’t believe how much chocolate he and others walked away with. Max returned from international training for BR2 and with Max 2nd overall Edan 9th and Jack 11th they were rightly disappointed to be pipped for the team prize by Wharfedale seniors. Unluckily the same happened in BR3 as Max was once again 2nd overall and claiming his 2nd win over fell running legend Ian Holmes in as many weeks , Edan was 11th and Jack 12th but Bingley managed to get 3 seniors in the top 10 to take overall first prize. Still for a 14, 15 and 16 year old thats some going to be 2nd team two weeks on the trot.

Max having missed the first race wasnt eligible for any series prizes but Edans consistency saw him take 2nd U16 series prize and scaring him into running so well was Jack who has announced himself well and truly with a fine series of races which saw him claim 3rd u16 overall with both of them being beaten only by the National Champion.

In the girls races Issy has continued to rediscver her form of a year or to ago and has placed regularly near the top of the U16 race however with the official results yet to be confirmed its not possible to say where she has finished overall.

All 4 have given themselves excellent chances of being selected to represent Yorkshire in the forthcoming Intercounties race at Settle in May. 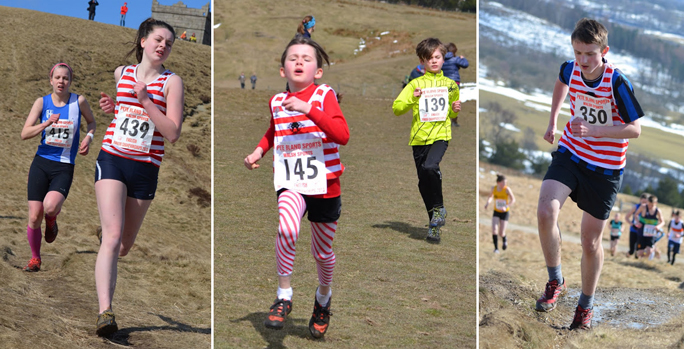 Issy, Olivia and Martin in action at Rivington – Courtesy of Woodheads

The Fell Runner Association English Championship race series got under way over the Easter weekend at a venue that hasnt featured in the race series before. Sat saw juniors from all over the country descending on Horwich to tackle Rivington Pike amongst them were several hardy soles from Calder Valley Fell Runners.

There has been an annual fell race up and down the short but relentless Rivington Pike since the 1800’s so the event is steeped in tradition, and despite concerns earlier in the week that the race may be called off due to snow these concerns were ill founded as the weather on the day seemed to finally be heralding in the spring.

All the junior races started in the woods at the foot of the pike and took the runners gradually higher up the side of the hill through a combination of old road gravel path ways and steep grassy sections as the age groups got older until the U14 and U16 runners ran all the way to the top before rounding the monument and speeding back down through the mud and melting snow.

Calder Valley had juniors running in all the age groups really demonstrating how the local club has developed its juniors over the last few years. In the younger age groups it was particularly pleasing to see many juniors beginning to take to racing and having a go, Ella Cavey ran in the U8 race and in the U10 Jude Baldaro and Olivia Sylge both ran well with Olivia taking 5th girl and Jude finishing well inside the top half of the boys. Cherry Sylge, Imogen King and Nathan Sharkey all ran in the U12 race. Gemma Johnson stepping up an age group this year found the U14 race testing as this took in a particularly steep grassy section whereas Martin Howard who is in his second year in the U14 category found it more to his liking.

The U16 age groups saw the clubs junior stalwarts returning to action yet again. Issy Wharton found the going to the top of the pike tough but her pre race plan was to try to stay as close to the leaders as possible on the way up and rely on her descending skills to give her a chance of success, this proved to be a wise plan as she reached the top in 9th place and by the time she crossed the finish had got herself into fifth, the boys age group which is perhaps the mostly hotly contested age group this year saw Edan Whitelaw holding his own against the very best. Climbing strongly he reached the top of the pike in 5th place however in the long run back down he was unable to hold this position and finished in 7th one place behind him cam Jack Denton who was running in his first U16 race and having climbed steadily he showed real strength and determination on the downhill section to overtake several more experienced runners to record a very creditable 8th place.

Matthew Murray who despite having trained with Calder Valley for years has only taken to racing this year did himself credit in a very tough race.

It was therefore left to Max Wharton to record the clubs best result of the day, running as an U18 in the senior race which started from down in the town of Horwich itself before picking up the same route as the U16 took to the top. Max was well placed amongst the senior leaders from the very start climbing strongly he was leading the U18 race easily however his competitive instinct didn’t allow him to ease off on the descent as he tried to work his way through the senior placings, and having got himself into 6th overall he fell fowl of one of the last remaining snowy parts of the route taking a fall which lost him some places overall however he was able to finish the race and take the win in the U18 age category.

The English Championship series next race is in Shropshire at the end of April just ahead of Calder Valley own Coiners race which takes place on May Day Bank Holiday in Mytholmroyd more details of which will be published soon.